So, what do I actually do?

Well, I used to focus on designing eye-catching planting schemes, which I absolutely love, but so many clients started asking me to do hard landscaping (such as patios, paths, decks, walls and fencing) that I now have a good team of reliable and experienced tradespeople on hand. Landscaping is highly skilled work and it needs to be done properly. I also do general garden maintenance, everything from pruning, weeding and returfing lawns to clearing ‘jungle’ type gardens (so don’t be concerned about contacting me if your garden was last looked at decades ago, I know how it is when you are busy with work and life).

But really, the best way to explain what I do is by showing you some before and after pictures. Now bear in mind, I am a much better gardener than photographer but I’m sure you get the idea.

If you want to see some more examples, visit my facebook page at http://www.facebook.com/Makethemostofyourgarden where I post regular updates on gardens I have worked on, timesaving tips and other relevant information. And if you want me to work on your garden, then click below and fill in the request form.

Before: This courtyard garden was once lovely but had become very overgrown, with giant roses, ivy and shrubs running rampant, pulling the old trellis to pieces, and what turned out to be an attractive brick patio covered in moss, weeds and slime.

After: A few days of hard work really transformed this space. Considerable cutting back and pruning brought an ornamental cherry and huge cotinus back into shape, borders were cleared and replenished with new topsoil before being planted with a range of evergreen and deciduous perennials, grasses and small shrubs to provide more variety and texture as well as colour throughout the year. The trelliswork was completely replaced with more attractive, denser trellis (providing greater privacy from the mews which ran along two sides of the courtyard) and the patio was cleared, cleaned, jetwashed and finally dressed with new jointing sand.
The cats definitely seem to approve of their new garden !

Before: A large suburban garden that had got out of hand with large overgrown shrubs and borders.

After: Shrubs around boundaries cut back, borders cleared of weeds and reshaped, ready for new planting, a large number of existing plants were able to saved and replanted once the borders were cleared. Bark was later spread over the borders to help suppress weeds and the spread of over-enthusiastic perennials.

Before: A small courtyard garden, open to the kitchen/diner through large bi-fold doors but which lacked interest, plants and generally detracted from the house.

After: Cosy and contemporary, might sound a bit contradictory but that was the feeling I got when I visited this clients house. So I proposed a quite simple combination of fencing, zinc planters and minimal low maintenance planting to create a contemporary look, using Western Red Cedar timber to give the space a warm, quite cosy feeling, creating a more appealing space for relaxing or entertaining. And a much more attractive view from the interior of the house !

Before: A small but well-proportioned back garden, somewhat overgrown and lacking in interest and colour.

Before: The owners of this very large suburban garden wanted to create a more enticing view from their house, with variety and year round interest. The space had huge potential but was just too large a project for them to take on themselves.

After: Broad sweeping borders were created, to draw the eye into the garden. The first half of the garden, nearest the house, was densely planted with a fairly eclectic selection of over 500 trees, shrubs and perennials. Planting further down the garden was more naturalistic and muted, in keeping with the woodland feel created under the canopy of existing mature trees. I can’t wait to revisit this garden in a year to see how it has developed ! 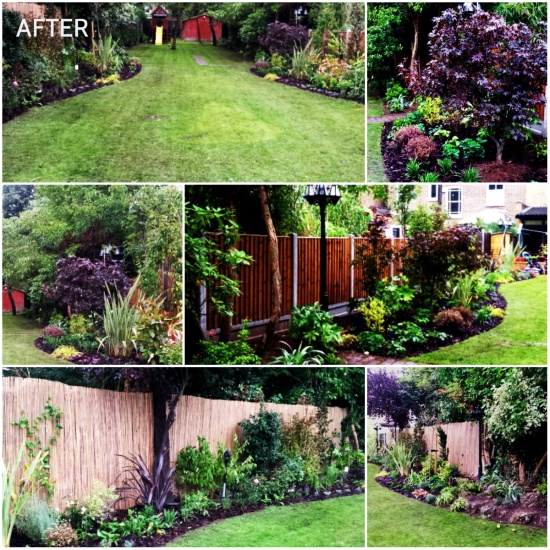 Before: This was a quite overgrown back garden with no space to sit outside, insufficient storage for bikes and tools and nowhere for kids to play.

After: Garden makeover project: significant clearance of overgrown plants and weeds, prune back but retain existing shrubs and climbers, fill in an old pond, level and returf the lawn, redefine borders, lay a new London stock brick patio (to match the house), remove two old sheds and build a new larger shed to store everything away.

Before: This front garden was originally a mixture of old cracked concrete and crazy paving, with no areas for planting. The owners had recently refurbished the house and wanted to bring the front garden up to the same standard.

After: The entire area had to be excavated, the old concrete removed and the site levelled. After laying a robust sub-base (the area was also used for parking), riven sandstone paving in a range of warm tones was laid and edged with matching square setts. Stone chippings in complementary tones were laid over permeable weedproof membrane in the area in front of the bay window. The owners wanted to choose and plant up the garden themselves so borders were topped up with screened topsoil and left ready for planting. 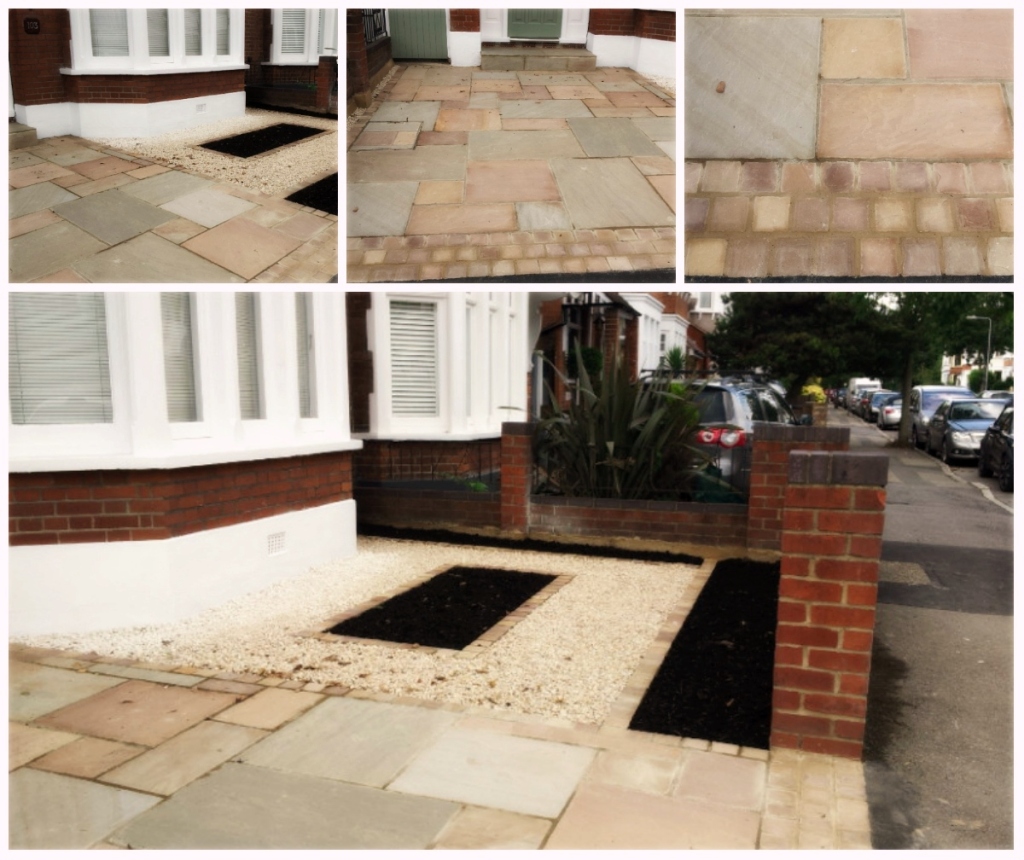 Before: A fairly standard London front garden, the uninspiring home to wheelie bins, litter and mud. Not much kerb appeal but surprisingly easy to sort out.

Before: An overgrown jungle in north London. I see a LOT of these, it’s always fun when someone opens the back door and you step out into something that was last touched about 20 years ago. This one was complete with a concrete air raid shelter hidden at the end of the garden, which we removed.

After: Clearance followed by a complete makeover. Added two new Yorkstone patios, new fencing on the left, existing fencing on the right was treated to preserve it, a summerhouse was built and a shed added for storage. After the construction was completed, there was extensive new planting and the garden was finished by rotovating the lawn area, levelling it off and turfing.

Before: A quite sad and neglected garden, not particularly overgrown just totally uninspiring and a bit of a waste of space.

After: The lawn area was redefined with larger borders edged in brick. The new borders were then densely planted with a mixture of evergreen and deciduous shrubs and perennials, to provide fairly riotous combinations of colour, texture and year round interest. All existing trees were retained but were pruned back.  The lawn was renovated.

Before: Its another jungle ! This time abandoned part way through being cleared, due to exhaustion of the owners, I think they got fed up with it which is fair enough given how overgrown it was.

After: I finished clearing the garden, cutting back all the ivy and overgrown shrubs, discovering that  it was actually a sizeable garden (the owners had never been to the end of it so weren’t really sure how far back it went). After the garden was cleared, we replaced the fence down the right hand side, built a deck to sit out on in the sunniest spot at the end of the garden and constructed a shed for storage. The lawn area was rotovated, levelled and returfed.

Before: This small back garden was cared for but quite unusable as the gravel had been laid over a very uneven, bumpy surface which was not only unattractive and filling with weeds but was impossible to sit out on with a table and chairs.

After: The gravel was removed and reused elsewhere in the garden, a considerable volume of soil was also removed. A new brick paver patio (colours to match the house) was laid over the levelled ground, in a herringbone pattern. New borders were defined along two sides of the patio to allow the owners to add their favourite plants in their own time, so I can’t really say this garden is finished yet !